Alhamdulillah.  I am very truly happy for you!  So now I ask you to do something that may be hard- pray for your brother and forgive.  I know this period of time has possibly made it hard to see, but he is a good man and a good father. While this may be the best situation, it will also be a cause of suffering for a good man.  He may need that trial but that is up to Allah not us. Also- Allah put you through a big test/hardship and I know you have been pondering and contemplating but think hard on how this struggle is suppose to teach you & improve you- make you a better person, woman, wife, Muslim.  Love you my dear.  Have a beautiful day!

The above note is a text from a dear friend, a mutual friend of both me and my ex-husband. It came the morning after I sent out a mass text/ fb post, hinting at a personal victory: the judge’s rulings in my trying court, divorce trial. While I understand my friend’s wise advice, it stung me deep to the core. And what, might you ask, led to this initial sting: 1) the small time lapse between my sharing this personal victory and her response to pray for him, OR 2) the fact that it was coming from a female—I imagined a female friend would side with her girlfriend. Perhaps, more pressing than either reason above, it magnified in my mind how the man seems to always get the upper hand, the benefit of the doubt, the second chances within the cultures and communities with which I mostly associate: African-American and Muslim.

Question: Do not women have feelings, and even egos that need stroking, too, giving us full credence to cry out, to FIGHT, to share our stories, to get people to see where we, women, are coming from?? Can’t I share my story with full confidence that God is also with me every step of the way? And is it possible that I too am a “good” woman, and God had me go through this as a means to elevate me to a more peaceful and productive state of being, living, and loving. Couldn’t this all be a gift that God gives to yet another sincere servant?

While the Qur’an, in its discussion of divorce, speaks to the rights men have over women, God also says that, “women shall have similar rights to the rights against them.” I know that this statement of rights is followed up with, “And men have a degree over them.” However, many commentators interpret this as a degree of kindness and responsibility:

“Ibn ‘Abbas is reported to have said, ‘This degree is a reference to men’s encouraging good relations and their generosity toward women in wealth and virtuous behavior, which means that the one possessing the upper hand must be biased against himself”(The Study Quran).

“It is not lawful for you (men), to take back any of your gifts (from your wives).”

Had my friend even considered how I, the woman, had been treated in this divorce, whether or not I received the rights that are divinely sanctioned for me? Had she considered whether the divorce proceedings were peaceful and just; whether certain gifts that had been given to me during the good times of our marriage been taken from me or withheld to spite me? Perhaps most painful to consider: Had she considered the possibility that I had been abandoned, left to rely on my family?

Instead of considering all these possibilities of a woman being denied her divine rights, my friend was more inclined to think of the feelings of the husband. Unfortunately, this tendency to prioritize men’s egos is not unlike that of many Muslim women, especially happily-married women, and definitely not unlike that of many Muslim men. Many empathize: Oh, it’s so hard being a married man in this society. True. Dare add sentiments about the plight of being a "Black Man in America": Don’t you realize how hard it is for a Black man to be the type of provider [qawwam] he wants to be in this society? Oh, his ego is so fragile; we must, as women, protect his ego and be a comfort to him as he fights against a society that sees him as a threat and fights against discrimination, racism, white privilege, inequality, etc.

*Trust me, God has made me keenly aware of this struggle as the loyal daughter, sister, friend, former lover, and now mother of the Black American man. I’m also grateful for the work of scholars such as Coates, Dr. West, and my cousin Dr. Winters (Duke University) for bringing light to this struggle. Not to be mistaken, a sista is down for the cause; yet and still, I choose God first, and God demands men to protect the rights of women as a sacred duty as my sister Dr. Karim discusses here. Second, I choose the richness of life. I choose to live a full, satisfying life, and growing up, my mother taught me that Ayisha means full of life.

Many of these same men and women, who focus on protecting men, use the following Qur’anic verse to justify their thoughts:

“Qawwamun” is usually translated as maintainers and “qanitat” as devoutly obedient, understood first as obedient to Allah, and most traditional interpreters would also add, obedient to husbands. Indeed this verse does suggest that men have an important sacred role that women should honor and respect. And too many of us seem to think that honoring men should come at the expense of overlooking women’s needs. In this case, we are denying the Qur’an’s clear demand for men to maintain justice in their dealings with women.

Another possibility is that we need to see v. 4:34 in a new light. Kecia Ali, a fellow Duke alumna and Islamic scholar addresses a certain ambiguity in this verse, and uncovers an aspect of it, which many fail to consider when viewing the man/husband as the one with the advantage:

“The most important element in re-readings of this verse is the focus on male support of women. If men are qawwamun in part ‘because of what’ they spend on women, then their role is dependent on their exercise of financial responsibility. If men no longer support women, then they lose any resultant authority. (Thus, in a family where both husband and wife contribute to the household expenses, the husband would not be the wife’s qawwam.)” (Sexual Ethics and Islam)

Regardless of whether or not you agree with Ali’s stance, my initial feelings and concerns still hold. I fear that if we so quickly come to the defense of the Muslim man and his rights, or even see men and women as equally vulnerable without recognizing that men have a greater responsibility to be kind--which implies that women have a greater chance of being wronged--,we risk overlooking, downplaying, and even dismissing the  status of women in marriage and divorce. In simple terms, we leave very little room for compassion.

Even more, we further isolate Muslim women, suppress their voices, discourage the telling of their stories, and at worst, we send virtuous, striving women looking for more satisfying alternatives outside their faith of Islam. At times, this is done unconsciously as we allow our speech and actions to be guided by our wounds and scars, lingering from slavery and racism, stemming from the “dominant group’s legacy of greed, exploitation, lies, and denial,” to use my sister’s words.

During this beautiful month of Ramadan, let us return to a focus on the heart and its purification. Believing women need a constant cleansing of the heart to be the nurturing, compassionate, and caring individuals that God intended us to be. Perhaps our storytelling and sharing of major life experiences are healthy, productive ways to remove the darkness and impurities trapped in our hearts, blocking us from becoming better Muslims, better human beings, and better mu’minat, believing women.

Ayisha Karim is a native of Atlanta, GA, where she lives with her two children and is surrounded by her loving extended family. She is a high school math teacher, working at one of Atlanta’s favorite private schools, and occasionally serves as a diversity practitioner. Ayisha is an active Muslim woman and primarily attends the Atlanta Masjid of Al-Islam of East Atlanta, where she grew up and attended W.D. Mohammed High. She studied at Duke University and Teachers College @ Columbia University.
She enjoys listening to music, painting, reading, traveling, and engaging in spiritually-heightening conversations.
She is currently reading: Americanah, Born A Crime, and Reclaim Your Heart. 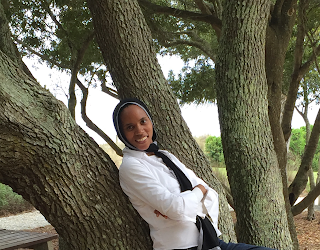 Jamillah Karim is a writer, scholar, activist. See her professional profile here. She has high hopes to be with God, to be in the company of the Prophet Muhammad and God's favored servants who act with beauty, such as Hagar, may Allah grant them peace and blessings, to maintain a healthy, loving family, to contribute to her community, and to write with God's grace with each stroke of the pen.

When Prophet Ibrahim brought Hajar to the desert and began to depart, she called out to him about the dire hardship that his actions would place upon her and their nursing child: “Where are you going leaving us alone in this valley where there are no inhabitants, food, or drink?” She asked this question several times with no response from her husband. Finally, she asked, “Did Allah command you to do this?” When he answered yes, she responded, “Allah will not neglect us.” The way in which Hajar’s distress in the face of an extremely difficult situation changed once she realized that the source of the difficulty was from Allah, not her husband, indicates her rida, or contentment with Allah.

Many of you know the rest of her story. If you do not, we will share in a later post. We are Hagar because we live her unique struggle, we strive to be among those satisfied and happy with Allah in all states, and we seek to leave behind a great legacy as did our mother Hagar, may God have peace on her forever.
Posted by Hagar Lives at 9:21 AM No comments: