Alhamdulillah, I was quite pleased and grateful to discover these 2018 amazon reviews of my first book, American Muslim Women: Negotiating Race, Gender and Class Within the Ummah. 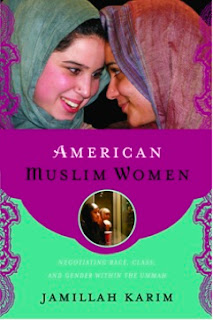 Dr. Jamillah Karim speaks truth to power! This brilliant book has become a cornerstone of my library and played an immense role in my return to academia as it sheds light on the lived experiences of Muslim women in America. By focusing on Muslim women within in their religious spheres along with the imbrication of race, gender, class and age--Dr. Karim delivers a richly textured account of and on American Women as they negotiate so many facets of their identity.

By fully, confronting the intra-Muslims racism of American Islam, Dr. Karim has created an opening for a new genera of study and long overdue discussion on this very real issue.

This book is perfectly suited for the non-academic as well as those within. Her brilliant methodologies foster an accessible reading.

Above all, Dr. Karim sheds light on the eloquent and nuanced dance of identity negotiation(s) that all Muslim women must perform in the richly diverse context of America. One of my all time favorite books!

Ground-breaking study on gender and interminority relationships. A bold move away from studies that give a "portrait" of one particular ethnic minority. Also brings an important class analysis. A must read for religious studies, American and ethnic studies and the study of Islam more generally.

How I Kept My Muslim Faith Through the College Years: A tribute to mothers, a message to the youth


It was May 1993 when I stood where you are today. I was in the second graduating class of W.D. Mohammed High School. Our graduation theme was “Rooted in Faith, Growing in Excellence.” I dedicated my speech to my mother, a faith-filled woman who had the vision to see that we as a community could educate our own.

As you know, not everyone had this vision, not everyone believed that dreams could come true. Our community not only educated us but also equipped us to compete with the world’s brightest and privileged. Alhamdulillah, we accomplished not only what was expected of us but also exceeded expectations.

In my case, it was earning a Bachelors of Science in Electrical Engineering at Duke University and then continuing on there to complete my doctorate in Islamic studies.

Rooted in Faith, Growing in Excellence
Honoring the Wombs That Bore You

It’s fascinating how these two themes connect. “The wombs that bore you” is a Qur’anic reference. In the Qur’an’s chapter “Women,” verse 1 states:

O Humanity, reverence your Lord, who created you from one soul and created from it its mate and dispersed from both of them many men and women. And reverence Allah, through whom you ask one another, and the wombs. Indeed Allah is ever, over you, an Observer.

The verse is telling us to reverence Allah, and second, to reverence the wombs. The Arabic word for wombs is arham. And what words do arham resemble? Allah’s names Ar-Rahman and Ar-Rahim.

As Allah is the ultimate source of mercy, the wombs are sources of mercy, love, and generosity like nothing else in creation. And, therefore, as Allah should be honored and regarded, so too should women, because each of us carry within us divine mercy. Women are the doors to mercy in this world.

To the graduates, and to all of us, the message I hope to impart is that honoring our mothers is part of our worship. It is such in the way that the Qur’an describes when it tells us to treat our parents with outstanding kindness, singling out the unrivaled gift and sacrifice of mothers:

What does this faith walk look like when we leave the womb of WDM High? For me, at Duke, it was several things. It was upholding my prayers, or salat. In the beginning, this meant making up my prayers at the end of the day because I would miss my afternoon prayers while out and about on campus.

I soon realized it was easier on me to make each prayer in its proper time. I found a quiet place to pray in the basement of Duke’s chapel, which stood at the center of Duke’s main campus. For your generation, it’s even easier. Many schools now have designated prayer spaces for Muslim students.

But even if we had those back then, I imagine I would have kept in mind that the whole of Allah’s earth is a masjid, a place to pray. Some of my fondest memories consist of praying near a fragrant magnolia tree on Duke’s east campus, in the spring when vibrant tulips were in full bloom. Alhamdulillah, I had come to a place in my faith and practice where it didn’t matter if others saw me pray.

And this relates to another way that I walked the path of faith: by making it known that I was Muslim through my dress. Because of it, people knew that I held values, that I refused to be like everyone else, and I was greatly admired for this, in ways that I didn’t fully understand until years later. This was so because human hearts are made to love leaders. May Allah make you leaders in faith, for surely Allah loves the foremost in faith.

And whomever God loves, the people will love. So try to forget how you look in the eyes of others. Focus on how Allah sees you, and you will gain everything, often with delay because Allah loves to see us exude beautiful qualities like patience and gratitude in the face of struggle. Ultimately, though, you will possess your hearts’ content and more.

Another way that we walk the path of faith is surrounding ourselves with people of faith, and other Muslim students in particular. From the beginning, I attended Muslim Student Association meetings every Friday evening. But after those Friday gatherings filled with great food and company, I would hang out with my African American friends.

By the spring of my sophomore year, I pledged a Black sorority: Delta Sigma Theta. By my senior year, I was the president of our university chapter. I share this to say that I was very much integrated into the college social scene, which is likely to captivate you as well and present some of your greatest tests. However, my intention to put Allah first, carried out through my salat, and my visible commitment to my faith, seen through my hair covering, positioned me to be a leader, not a follower, among my Christian friends.

So much so that I witnessed remarkable love from my Christian friends when I did the unthinkable and decided to step in the spring step show my senior year. And I say the unthinkable because anyone who knew me in the ‘90s knows that I was the conscientious student, not the free-flowing artist (that I consider myself now, smile).

When it was time to select outfits for the show, my line sisters went out of their way to accommodate me. Instead of choosing outfits showing a lot of leg and pretty brown skin as they normally would, our step master had our outfits tailor-made by a local seamstress. The outfit was a chic black pants suit, with stylish sleeves that complemented the flared, slightly bell bottom pants. Alhamdulillah, it was not just me covered all up, but all my sisters.

So I thank Allah for allowing me to preserve my faith—and influence others!— in an environment that can easily tear it away. May Allah grant you the same. With faith, everything else falls into place. With faith, you will excel in academics, whether at the beginning, or with patience and perseverance, at the end. Allah willed that I excel at the very beginning.

I made the Dean’s List with Distinction my first semester: an A in writing, an A in Calculus, an A in Computer Programming, and an A- in Chemistry. But this never happened again. I received more humbling grades along the way. In fact, I received my first C the semester I pledged DST.

But Alhamdulillah, I managed to finish Duke with Latin honors--Cum Laude--with a GPA of 3.6. Only 25% of Duke graduates finish with honors. This relates to another telling thing that happened at the end of my four years at Duke. But to appreciate it, let me tell you a story from the first time I stepped foot on Duke’s campus.

In February of my senior year of high school, Duke flew me in for a campus visit. It was my first time on an airplane. By the end of the visit, it became clear that I was selected with a group of African American students to receive a merit-based scholarship. The Reginaldo Howard Scholarship is offered to individuals who “exhibit a commitment to transformative leadership, intellectual courage, and social justice.”

At the end of our visit, in a van on our way to the airport, someone came up with the smart idea to share our SAT scores. As people shared scores in the 13, 14, and 1500s, I grew anxious. I wanted to disappear. I had only scored 1160.

Fast forward four years later, spring of my senior year. I received my GRE test scores, the SATs of graduate-level admissions. I scored a 700 in verbal and a 700 in math, what would total 1400 (except there was a third area for the GRE, analytical, which I scored high in as well.)

My SAT and GRE scores indicate several things. One, that from the beginning, the Duke admissions officers selected me not solely on the basis of academic achievement. They based their decision on character traits as well (and affirmative action).

My ability to excel among Duke’s top 25 percent, when my SAT test scores fell in the bottom 5 percent for Duke students, indicates that it was upon the foundation of faith that I advanced. My GRE scores further proved this. When I was placed in the same environment with rich Duke kids over a period of 4 years, I tested exactly as they did, or better. Through faith, we can perform with excellence with or without level playing field.

But as we know, the true test is not the one of academics but faith. I use this famous hadith honoring mothers to make an analogy:

And when the tests come—and they will for sure—may you come out among the top five percent like the mother of our faith, the mother of the hajj, Mother Hagar/Hajar. I’ll end in remembrance of our Mother Hagar by reading an excerpt from a post on Hagar Lives, a blog by me and my sister Ayisha.

Hagar’s act of faith marks the site out of which the city of Mecca grew. Though reliance on God, prayer, and struggle, Hagar’s hands shaped the ground upon which a faith community, later a coveted city, and ultimately a world civilization would shine its light on the world.

May Allah make each of you the light to the world that your precious mothers have hoped, prayed, and struggled for.
Posted by Hagar Lives at 2:47 PM 2 comments: