In the Footsteps of Hajar, Part 2: Moving Hearts Toward the Beloved Community, ISNA 2017

In Part 1 of this post, I ended with how I was touched when the host of ImanWire, Mohammed Saleem, read a quote of mine about God having put the love of Muhammad Ali and Malcolm X in the hearts of non-Black Muslims as a gift  to facilitate their connection with and care for African Americans in general. 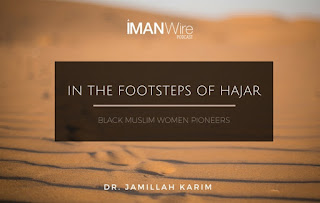 Even before that sentimental moment, I was impressed by the way Saleem sought to explore in the interview various aspects of my book with sincere enthusiasm and interest. Perhaps this is his job, nonetheless he carried it out with beauty and care. Alhamdulillah, I am reminded of the great honor Allah, the Most Great, has bestowed upon me to tell the history of my community. On top of that honor, I am moved that others value Allah’s entrusting me with the narratives of African American Muslim women especially. That Saleem is a man, of South Asian background, and feels this connection, amplified my feeling of gratitude for Allah’s beautiful gift and plan.

The quote on the love of Ali and Malcolm in the hearts of non-Black Muslims also worked well for Saleem because he wanted to end on a spiritual note. He wanted to move the hearts. And so I responded with comments from my last ISNA talk, where I also aimed for the hearts.

And this is truly the beauty of our mother Hagar as a perfect symbolic fit for the kind of scholarly activism to which I aspire. I am inspired to write passionately about race and gender, but my ultimate passion is being touched by and touching the hearts of people who desire God and His Beloved Prophet (S), above all else.

Mother Hagar embodies the race, class, and gender struggles that I bring to light in my scholarly work, but more than that, she represents the exemplary human being that finds satisfaction with God in the ultimate moment of distress, and as a result, changes the world forever!


And so I answered my gracious host--after he read my comments on hearts loving Ali and Malcolm-- with my latest reflections on becoming the beloved community as shared at ISNA 2017. Below I share an excerpt of my talk, which can be viewed in its entirety here.

But have we made the Beloved Ummah a priority? Do we ask for it in our dua?


Ask any Muslim, “What is the American Muslim struggle?” All of us would say the fight against anti-Muslim hate and bigotry. We’ve made that fight our priority. But what is the most effective way to fight anti-Muslim racism in this country?


The scholar and saint Abul-Qasim ibn Muhammad al-Junayd said, “One cannot struggle against his enemy outwardly except he who struggles against his enemies inwardly (and the inward enemies are the desires of the ego). Then whoever is given victory over them will be victorious over his (outward) enemy, and whoever is defeated by them, his enemy defeats him.”


If we do not prioritize the internal struggle--the fight for beautiful hearts--then how can we fight the external enemy of anti-Muslim propaganda and bigotry.
The Qur’an guides us in this regard through the example of the early Muslims, the Emigrants who left Mecca because of religious persecution and the Helpers, the people of Medina, who gave them refuge in their new city.


“...The poor emigrants who were removed from their homes and their possessions. They seek Allah’s grace and pleasure and assist Allah and His Messenger. These are the ones who are true. Those who were already firmly established in their homes [in Medina], and firmly rooted in faith, show love for those who migrated to them for refuge, and harbor no desire in their hearts for what has been given to them. They [the Helpers] give [the Emigrants] preference over themselves, even if they too are poor. And those saved from the covetousness of their own souls—they are the successful ones.”(59:8-9)

How refined were the hearts of the Emigrants and the Helpers! And herein lies the lesson to take home. The early Muslims, their hearts were made beautiful first--love was established in their hearts first--and then they fought and won battles together.

We want to be a beloved community in the eyes of American society, and that is an important and legitimate struggle, but our first priority, and sole concern really, is to be beloved in God’s eyes. “God does not look at your external forms but gazes upon your hearts,” said the Beloved of God, prayers and peace be upon him.

Let us get to the work of making our hearts beautiful, and that is the work of becoming the Beloved Ummah. Our survival and our position in this country depend upon it. We need each other to reach the heights of faith and beauty, the heights of iman and ihsan. For verily, our faith is not a complete faith until we love for our brother and sister what we love for ourselves.

Until we love Malcolm and Ali, and we love the people they loved, Muslim and non-Muslim, Black and non-Black.