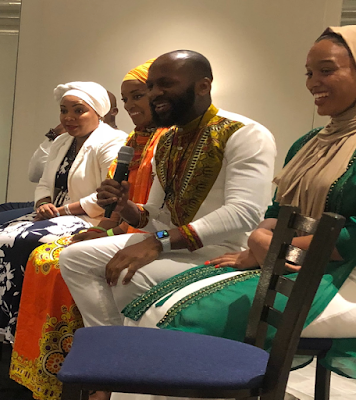 One month ago, the third annual CLF (Community Life Forward) Conference was held in Atlanta, Georgia, on 4th of July weekend, July 6-8th. The theme was Celebrating Islam in America: Replication, Renewal, & Revitalization.

Eight months prior at the first meeting of the convening council in Baltimore (October 2017), we were asked to share why we accepted the invitation to organize. I expressed, at that time, that my primary reason was to develop programming around family life in our Muslim communities, with particular focus on the institution of marriage, healthy, successful marriages at that.

Gathered in a conference room at John Hopkins Business School, a group of us gave heart-warming testimonies about how we met our current or former spouses at such conferences while in college or in our twenties, and formed lifelong friendships with other Muslims from around the country.

Such conferences played a critical role in cultivating high esteem in terms of how we saw ourselves as second generation, African-American Muslims. Yet, many of us, at the same time, agreed that unfortunately there has been a decline in the frequency and quality of such social interactions for our children’s generation, African-American Muslim millennials and younger. 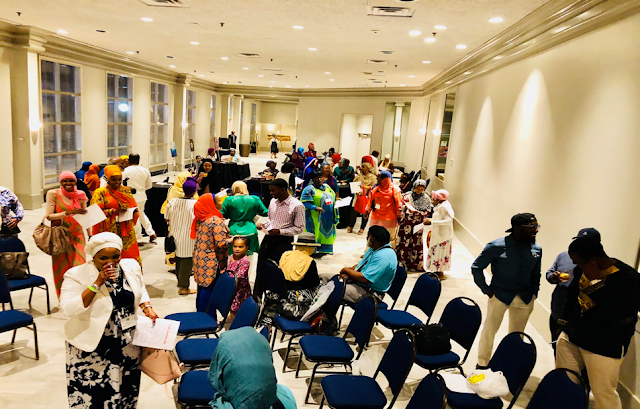 Prior to this placement, when committee heads were asked to submit proposals for their portion of the conference, our committee drafted a proposal that was oozing with relevant, juicy, and pressing family issues such as raising conscious Muslim youth, building community life, increasing access to courtship, mental health, recovery after divorce and polygyny, and more.

We also offered an amazing list of possible speakers, forums, and panelists to make it rich, impactful, and memorable. Yet, in the end, main conference organizers informed us that as a second-tier committee, there just wasn’t space in the program for what we’d envisioned.

When the co-organizers and I became aware of this decision, we decided to pack our social with as many juicy topics that we could possibly entertain in the two hours allotted us. We settled on the name, “A Night of Soulful Connection & (Fun) Interaction.”

I received this name from one of the older Muslim sisters on a yoga retreat in Costa Rica late June while sitting around the dinner table, after telling them about this event and what we envisioned. We all loved the name immediately! Past conference socials usually catered to your variety of single & looking or interested Muslim folk. We decided to make the Social for ALL adults, 18 years and up (vs. the over 30 & up we initially planned). Plus, get this: single AND married!

The two other female organizers were Aseelah Rashid (Atl, GA) and Nabeehah Azeez (Baltimore, MD). To ensure that the social was relaxed, informative, provocative, entertaining, and beneficial, we decided to mix it up a bit: icebreaker BINGO, stand-up comedy (Preacher Moss), a panel of relationship “experts,” SCENARIOS, and spoken word/poetry reading. 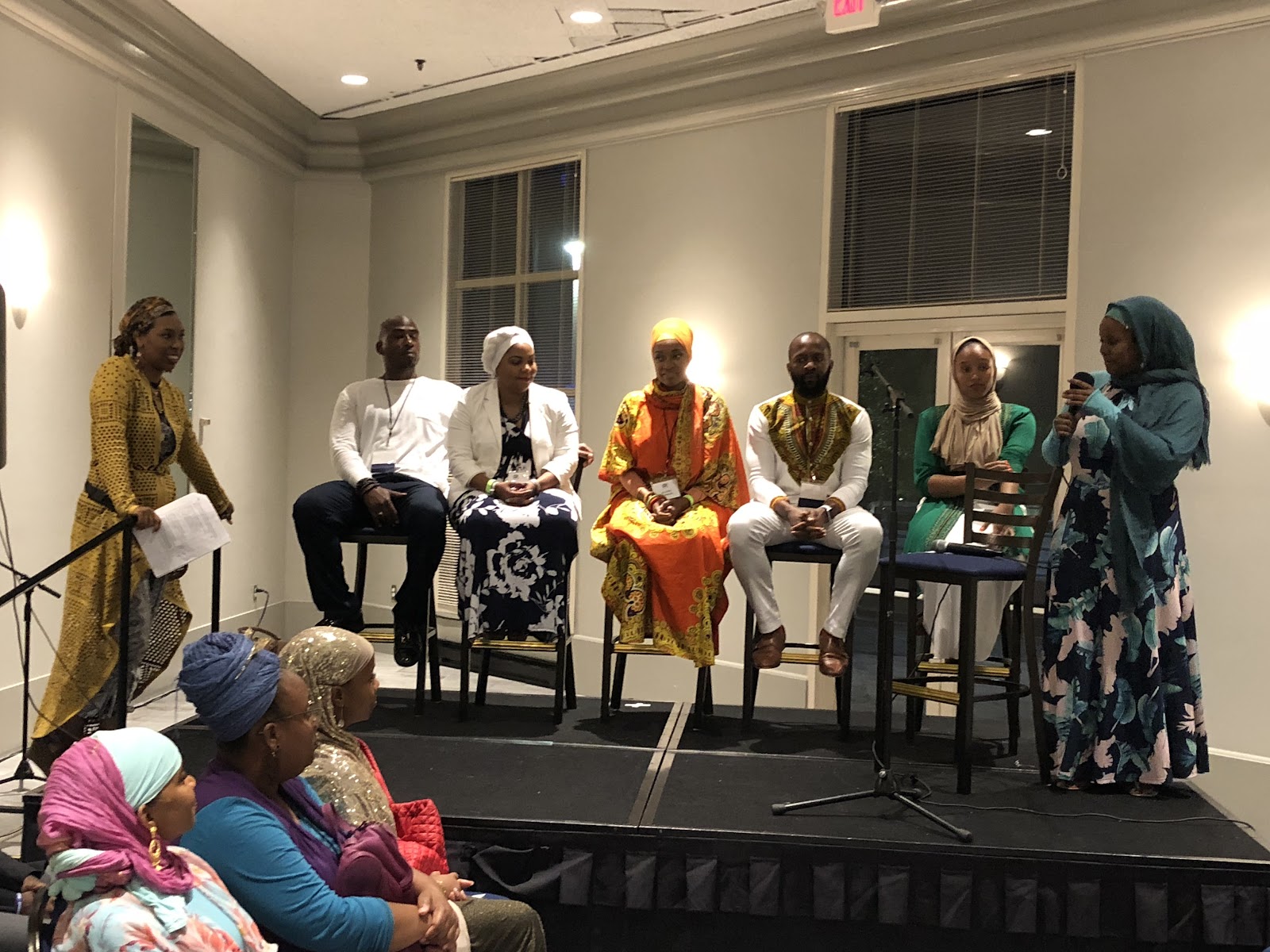 This leads me to the main point of this blogpost: the SCENARIOS, thoughtfully crafted by the members of our expert panel (seen in the photos here) and read to the audience by one of the three facilitators. But not just the “experts” came up with these SCENARIOS. I solicited the insight of a special male friend, who shared several ‘real’ scenarios as well. And yes, I’ll admit, I even threw one or two in there, with the help of a dear friend who stayed with me that weekend, and who’s been dealt a very similar hand at this stage in our lives.

Below, you can find a select sampling of these scenarios. I’ll try to put them in the order in which they were read to our audience. I encourage you to guess which scenario got the most attention, i.e., was deemed most discussion-worthy and provocative to our guests. Enjoy!

Scenario #1:
You see your friend’s husband/wife on what appears to be a date with another woman/man. Do you 1) walk up to the husband/wife on the spot and confront them, 2) give the wife/husband a call and tell them what you think you saw, or 3) say NOTHING in hopes of saving their marriage?

Scenario #2, Parts A & B:
As Muslim parents raise their children to be celibate, how do Muslim married couples later discuss intimacy, pleasure, and explorations of pleasure and the breadth of interpretation within Islam? What happens when Muslims, who are reverts, have a previous way of doing things, and marry someone born into the faith and are told one thing, not knowing what degrees of pleasure should be explored or how to respond to the other person’s shyness?

A Muslim brother and sister, interested in one another, have different levels of sexual needs. One person is looking at a holistic approach, recognizing time and place, while the other wants sex all the time and may or may not have an addiction, depending on how the individuals perceive sex and intimacy. 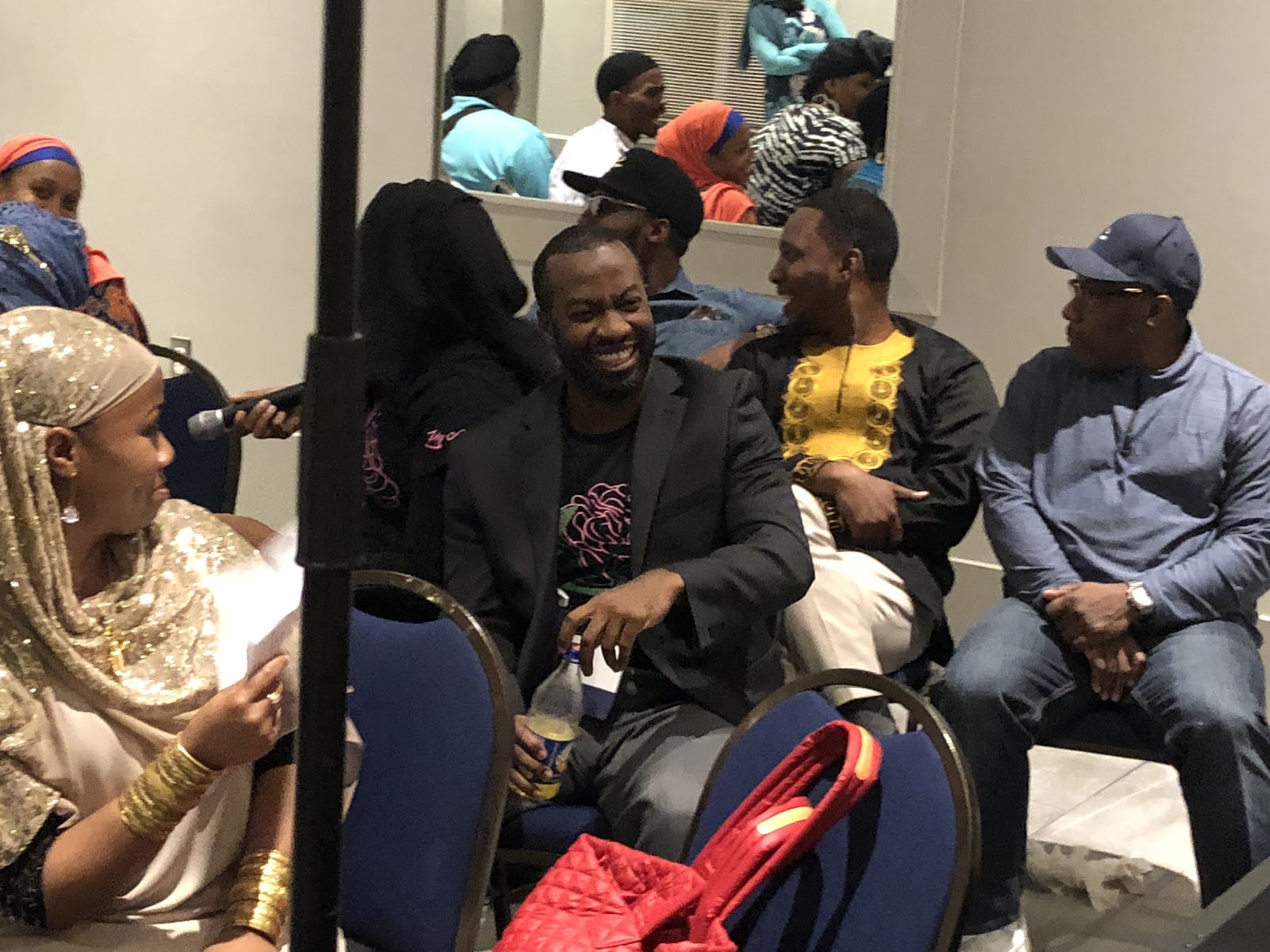 Scenario #3:
Your wife is a revert who grew up in a household where her father was a philanderer and her mother caught him having affairs. Growing up in such an environment causes her to have issues with trusting men. She is prone to jealousy and suspicion of relationships you have with females in your line of work, which affects the harmony in your marriage.  You love her dearly but are frustrated with her issues of jealousy.  Although you have to interact with sisters often, you are faithful.  How do you deal with the situation? 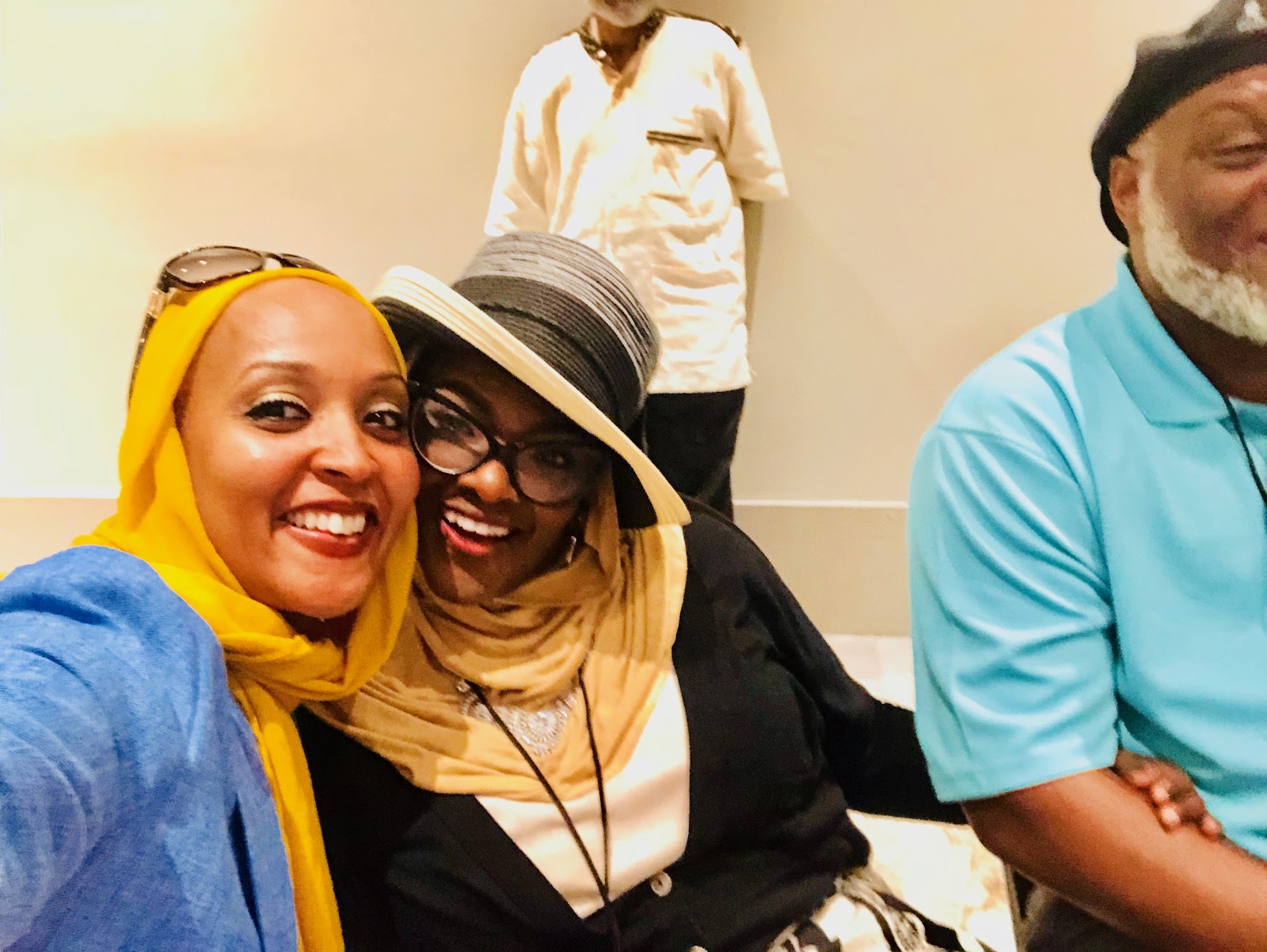 Scenario #4:
You have been courting your potential mate for about 2 months now. You guys get along great when it comes to chemistry, casual conversations, Deen [religion] and similar outlooks on life. One area that tends to cause a lot of tension is how you both handle money. One of you comes from a background of struggle and trying to make ends meet and the other comes from the an upper middle class background, never really having to worry about managing their money because they have always been good. Is this a big enough difference to call things off or do you try to work through this area of challenges?

Scenario #5:
How do you handle both being professional business people and each interacting with the opposite sex and non-Muslims?

BONUS Scenarios/Q’s (i.e., on the script but never shared due to lack of time)

A few years into your marriage, your husband hints at the possibility of polygyny. Ultimately, you are NOT open to it even though your religion allows for it, done “appropriately.” When he insists that he wants to take on a second wife for good reasons, you find yourself inclined to tell him that you’d RATHER that he court a woman privately (on the side) BUT not marry her, by all means. At what point do you choose between giving your husband your blessings on moving forward with polygyny AND leaving him open to other options OUTSIDE of the Islamic framework?

What are some good steps for an individual to take when preparing to get married? Would you take the recommendation of a respected member of the community who suggests to your parents that you and someone else would be compatible for marriage? What are some recommendations to help the love grow in a marriage for couples? What are some important things to discuss when courting someone?

As you can probably imagine, our guests got way more out of the social than they anticipated, walking in late that Friday night after 9pm. We received many comments and/or reactions, prior to and at the end, expressing concern around the limited nature of such opportunities for discussions around Muslim family life and relationships. Our own Muslim security team told us that we had to be out of the Art Gallery, where the event was held, by 11:30 pm. We closed the event with a love poem, recited by Youssef Kromah from his book Woke. 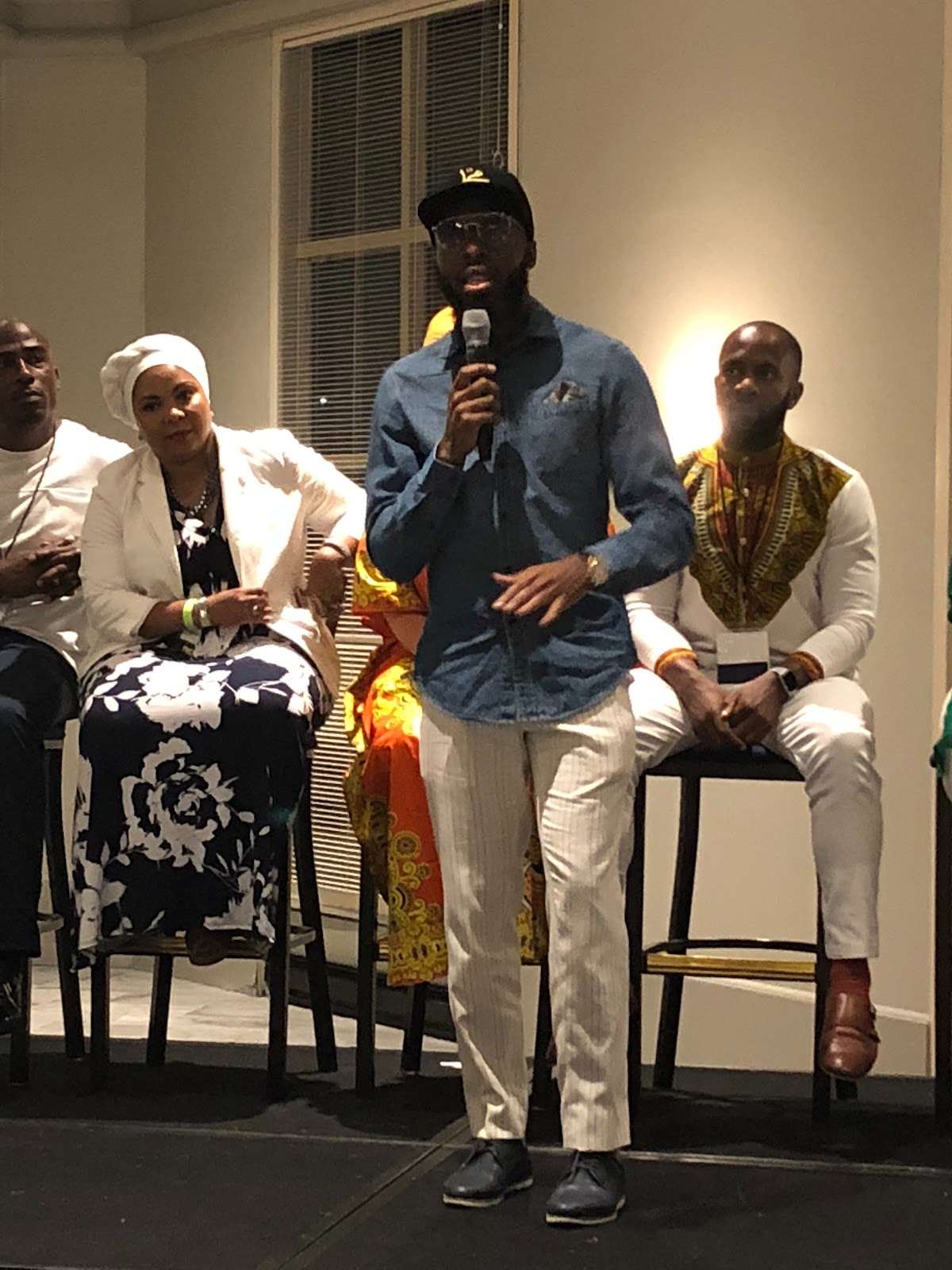 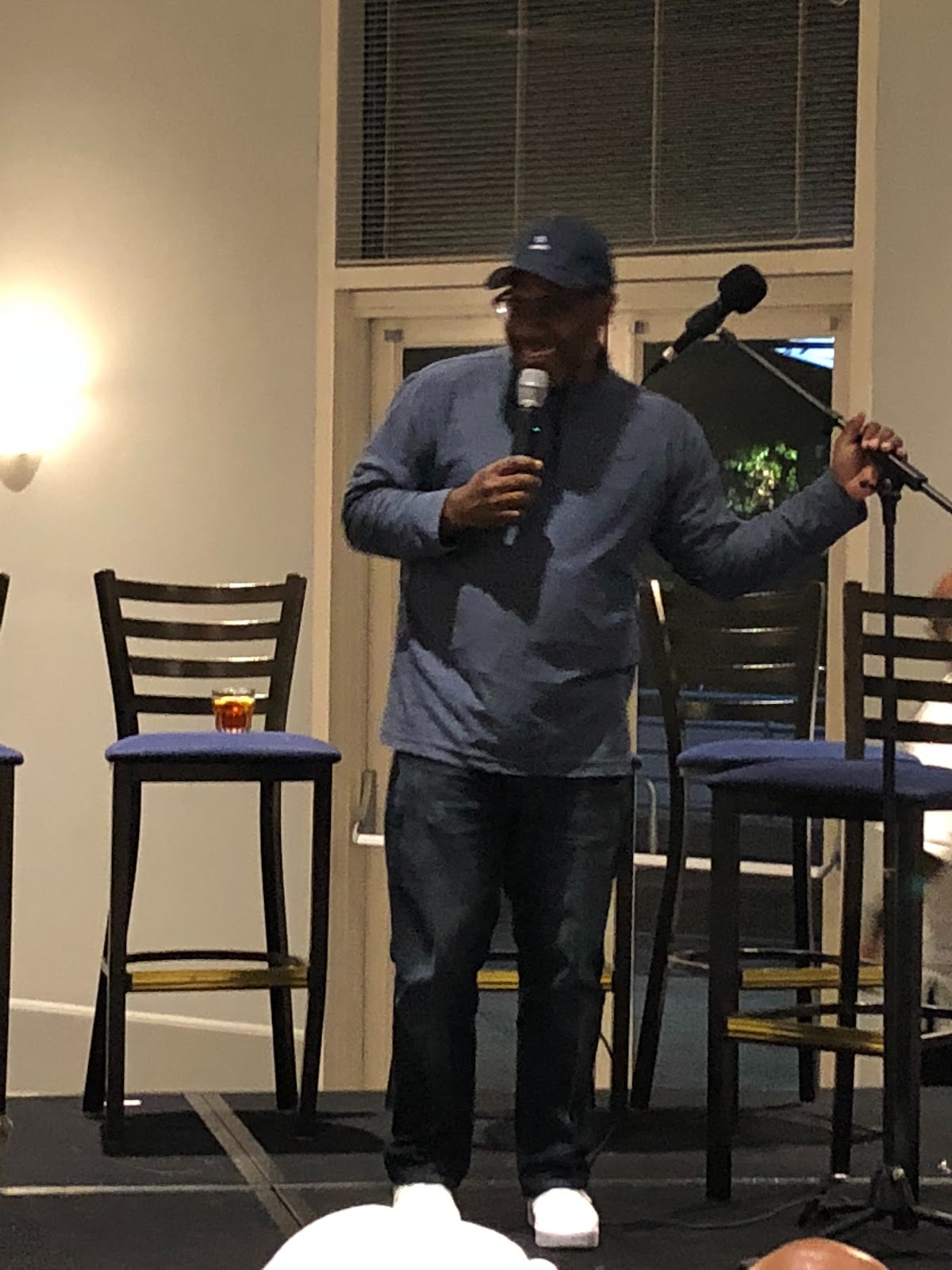 Guests left the gallery that night buzzing with unfinished & unresolved discussion, laughter at what they’d heard, and inspired to continue the conversations with their spouses, family, friends, and community members, and looking forward to CLF Social Event 2019/2020! Insha-Allah. 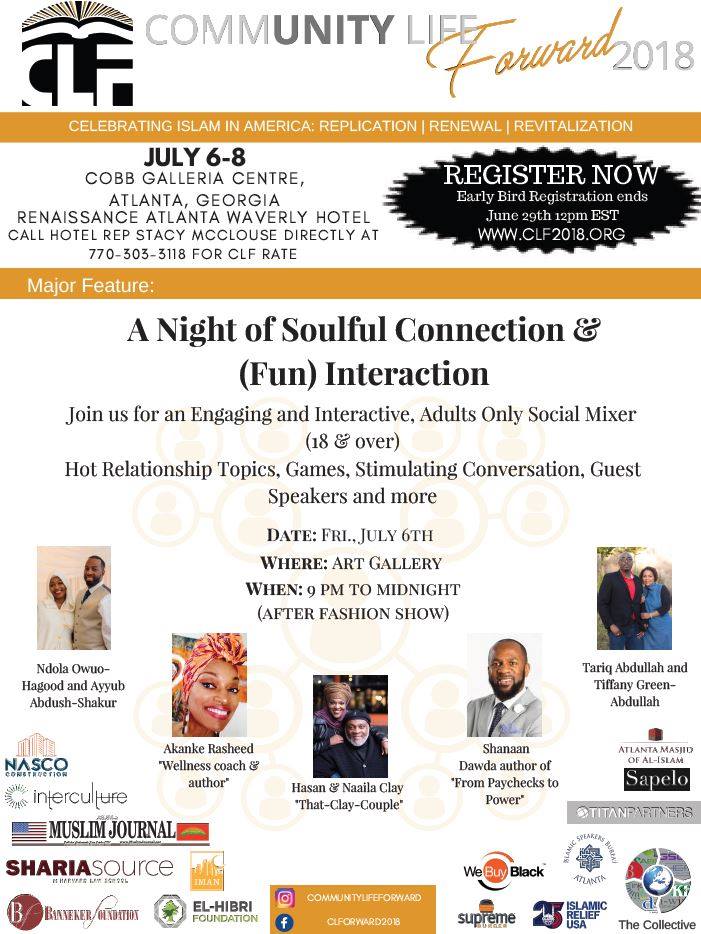